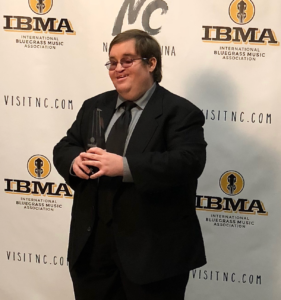 The International Bluegrass Music Association (IBMA) held their annual awards ceremony in Raleigh, North Carolina on Thursday, September 27th, and presented Michael Cleveland with their Fiddle Player of the Year honor for an unprecedented 11th time.

Cleveland, who has been playing fiddle since he was four years old, has been lauded as one of bluegrass music’s most naturally gifted musicians. In the IBMA Awards 29-year history, Cleveland is the most-awarded Fiddle Player of the Year. In his acceptance speech, he was quick to thank his family and team members for their support, and then gave a humorous shout-out to Flamekeeper. “I want to thank the guys in my band, because fiddle players are weird! If you can put up with a fiddle player, that’s doing something, man! No seriously, all the guys in the band—Josh (Richards), Nathan (Livers), Jasiah (Shrode), Tyler (Griffith), and Elliot (Beckly), our sound guy.”

Later in the evening, Cleveland & Flamekeeper performed a blazing version of Bill Monroe’s “Bluegrass Breakdown,” proving once again why they are the IBMA’s 5-time winner of Instrumental Group of the Year and were a 2018 nominee. To celebrate the event, the National Academy of Recording Arts & Sciences (NARAS) presented the official Recording Academy After-Party with Michael Cleveland & Flamekeeper as featured performers to a standing room only, and very enthusiastic audience. (Photo: Shannon Kelly, GRAMMY.com)