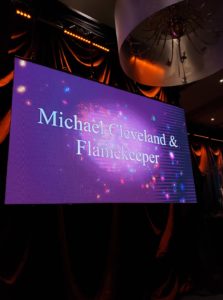 Michael Cleveland & Flamekeeper are on fire as they picked up two more awards on Sunday, February 2nd. During the National SPBGMA Awards held in Nashville, Tennessee, the band won Instrumental Group of the Year and Cleveland won Fiddle Player of the Year. The band now holds these honors in both national bluegrass associations which includes the IBMA.