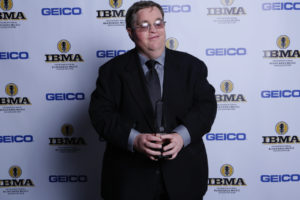 Michael Cleveland continued his winning streak with the International Bluegrass Music Association when he was named their Fiddle Player of the Year for the 12th time during the 30th Annual IBMA Awards on September 26, 2019. He is the association’s most awarded fiddler. Additionally, Cleveland and his band, Flamekeeper, were named Instrumental Group of the Year for the sixth time.

Cleveland has had an extraordinary year with the release of Flamekeeper: The Michael Cleveland Story, a critically acclaimed documentary on his life, and the August release of Tall Fiddler, his latest album on Compass Records, featuring his award-wining band alongside a handful of heavy hitters including Tommy Emmanuel, Dan Tyminski, Del McCoury, Sam Bush, Tim O’Brien, and more.